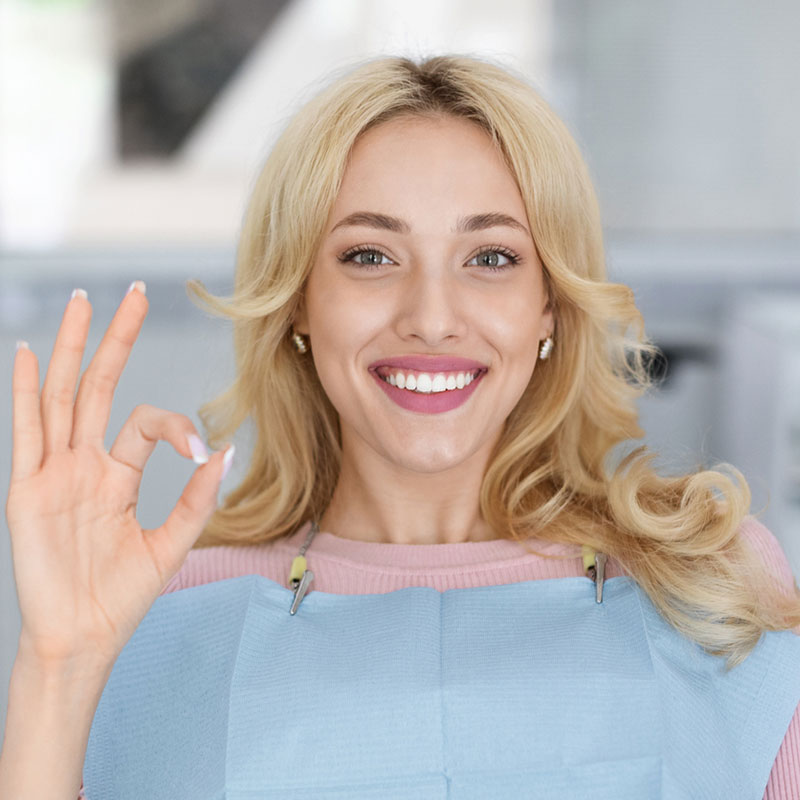 Village Family Dental is involved with several missions throughout the year to Granada and Nicaragua. The group takes everything needed for the trip: instruments, tooth paste, toothbrushes, antiseptic, filling materials, and gauze, all of which were donated. The value of the supplies was about $5,000. Donations came from Patterson Dental Co., Sullivan Schein Co., Crest, Colgate, Caulk Inc. and Valley Pediatrics.

The missionary program, Cristo Sana, was founded in 1992 in New Orleans through the support of the Archdiocesan Society for the Propagation of Faith. Cristo Sana was the brainchild of a group of doctors, nurses, other health-care professionals and volunteers seeking opportunities to work with underprivileged people in a developing nation. The program pairs missionaries with Nicaraguan counterparts so that each can observe, assist, and teach when invited. It also ensures that equipment and supplies are provided.

In addition to treating patients, a preventative program has been established, and one of the goals is to teach endodontics (root canals) and other specialty procedures to Nicaraguan dentists. The Nicaraguan dentists are well trained and knowledgeable, but their facilities are lacking. The lack of money and with Novaocaine as the only option for anesthesia, most diseased teeth are pulled rather than restored.

Over 100 children have had their teeth restored or received other treatment from our group at the free clinic. Dr. Faith McGibbon estimates that each dentist performed about $3,000 worth of services per day. Village Family Dental sponsors the trip, which cost between $1,200 and $1,500 per person. The participants also volunteered their vacation time for the project.

In April of 2013, another team from Village Family Dental made the trip to Nicaragua. Once again, the trip was made possible by the wonderful folks at Christ the Healer Missions, an organization based in New Orleans, Louisiana. The team included two doctors, two hygienists, four dental assistants and two clerical staff members. For these individuals, the trip proved to be one of the most challenging and rewarding experiences of their lives. They returned with a great sense of appreciation and a further desire to help those in need. They worked at least ten hours each day, performing treatment and seeing to the needs of numerous patients. A majority of the treatment centered around two orphanages in the Granada area. The team visited these children and provided them with treatment ranging from basic cleanings to extensive dental work. Afterwards, the team members treated patients of all ages at a nearby dental facility located in Granada. Patients received both simple and extensive treatment at no charge.

When not providing dental treatment, staff members took part in the Rice and Beans Foundation. Established to provide non-clinical volunteers with a means to help, this commendable organization allowed the team to supply local families with bags of rice and beans. The Rice and Beans Foundation would purchase 100-pound bags of these goods and divide them into individual packets. Available volunteers would then distribute them to families throughout the area. These efforts were met with great appreciation from the community. 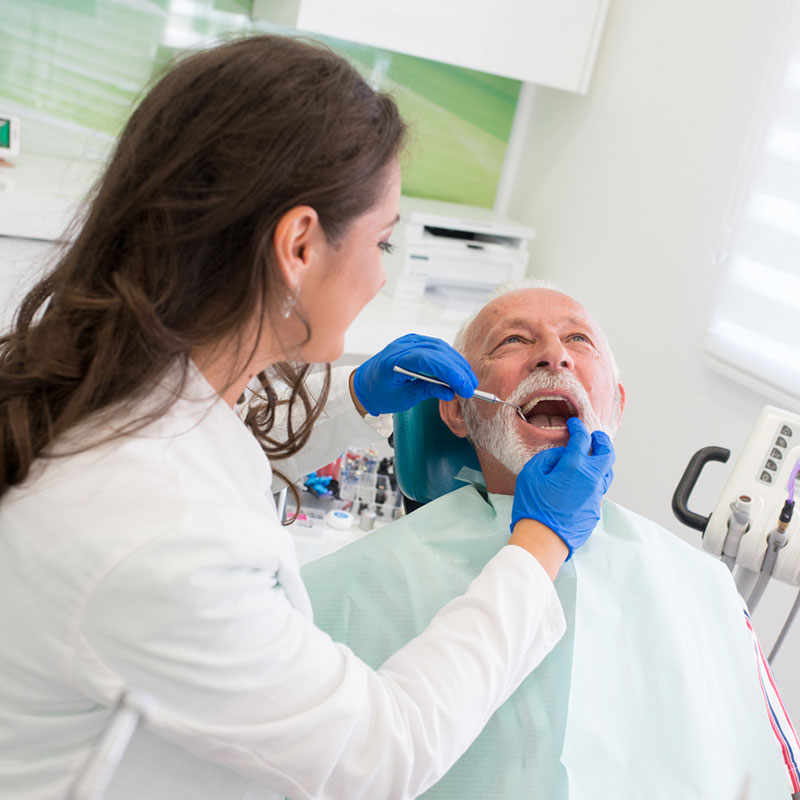 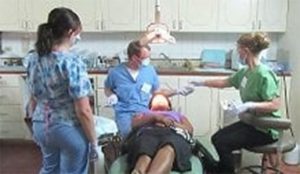 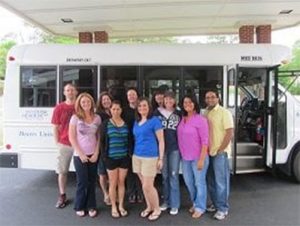 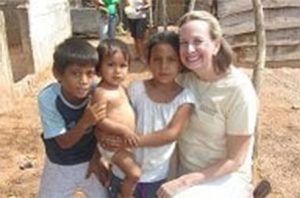 The Fayetteville Observer contributed to this story. Click here to read the full article

Filling A Need - By Lisa Snedeker

Originally published on Sunday, September 19, 2004 in the Life category of the Fayetteville Observer

None of the items left her suitcase during her week stay in August.

‘‘As the week unfolded, I became more envious of the simplicity of their lives,” she said. ‘‘I felt guilty for the luxuries I deem as necessities. Their wants are just basic survival.”

Newsham was one of six Fayetteville residents with ties to Village Family Dental who went on a mission to Granada, Nicaragua.

Call them ‘‘Dentists Without Borders.”

While the title is not official, the work is similar to that of the humanitarian organization ‘‘Doctors Without Borders.”

The group took everything it needed — instruments, toothbrushes, tooth paste, antiseptic, filling materials, gauze — all of which was donated, Newsham said.

Newsham is the office administrator for Village Family Dental. The group also included Dr. Faith McGibbon-Martyn, a pediatric dentist, and her husband, Tony Martyn, along with Rebecca Luna and Tanissea Richardson, dental assistants, and Suzy Williams, a dental hygienist.

‘‘I had done it before and enjoyed it thoroughly,” McGibbon-Martyn said.

In 2000, she took a two-week trip to Brazil with a Church of God group while she was a pediatric dentistry resident at the University of Maryland. There, she came face to face with the ravages of poverty as well as deplorable working conditions, she said.

‘‘We had to push desks together to form tables for the patients to lay on,” McGibbon-Martyn said, adding that they used portable dental units to do examinations.

McGibbon-Martyn experienced firsthand the effect that poverty has on patients, especially in their mouths.

‘‘There is an extreme need there for pediatric dentists,” she said.

McGibbon-Martyn, who has been practicing in Fayetteville for a decade, discovered the Cristo Sana program through some friends she met at the Marquette University dentistry school. Cristo Sana is Spanish for Christ the Healer.

The missionary program was founded in 1992 in New Orleans through the support of the Archdiocesan Society for the Propagation of Faith.

Cristo Sana was the brainchild of a group of doctors, nurses, other health-care professionals and volunteers seeking opportunities to work with poor people in a developing nation.

The program pairs missionaries with Nicaraguan counterparts so that each can ‘‘observe, assist, and teach when invited.” It also ensures that equipment and supplies are provided.

Dr. William Wayman established the new dental clinic — Cristo Sana Acuna Matata — that is staffed full time by a dentist from Granada. In addition to treating patients, a preventative program has been established, and one of the goals is to teach endodontics and other specialty procedures to Nicaraguan dentists. Spanish interpreters are provided.

The Nicaraguan dentists are well trained and knowledgeable, but their facilities are lacking, McGibbon-Martyn said.

‘‘They know the procedures, but they don’t have all the right equipment,” she said. ‘‘And they know about preventative dentistry, It’s just not being practiced.”

Dentists in Nicaragua are hampered when it comes to working on youngsters because they don’t have the options available in the United States for anesthesia, for example.

‘‘Here we have lots of things to choose from, they just have Novocain,” McGibbon-Martyn said.

That combined with a lack of money means most diseased teeth are pulled, especially if they are located behind the eyeteeth, McGibbon-Martyn said.

‘‘Instead of trying to save the tooth, they opt to remove it,” she said.

Newsham worked with the hygienist screening and educating children.

‘‘Those who really needed work they sent on to me for treatment,” McGibbon-Martyn said. ‘‘The biggest need they have is educating the general public on oral hygiene.”

About 100 children had their teeth restored or received other treatment from the Fayetteville group at the free clinic. There were 22 other Americans from a half-dozen states including three dentists who saw hundreds of patients throughout the week.

McGibbon-Martyn estimated that each dentist performed about $3,000 worth of services per day.

Tony Martyn is working toward his master’s degree in business administration at Fayetteville State University. While in Granada, he helped in the mission hospital and delivered rice.

‘‘I wasn’t going to let her go down there without me,” Martyn said gesturing toward his wife. ‘‘I was the protection.”

Martyn, who is originally from England, described the poverty as shocking. But he added the Nicaraguans he met lived a simple, happy life.

‘‘Maybe happier than here,” he said. ‘‘They are a warm and friendly people.”

The Village Family Dental offices of Knowles, Smith, McGibbon and Associates sponsored the trip, which cost between $1,200 and $1,500 per person. The participants also volunteered their vacation time for the project.

They stayed at the Hotel Alhambra in Granada for about $27 a night, and the total cost of meals at the hotel is about $100 for the week.

The value of the supplies was about $5,000. Donations came from Patterson Dental Co., Sullivan Schein Co., Crest, Colgate, Caulk Inc. and Valley Pediatrics.

The trip inspired other people in the Village Family Dental office and the building.

Nicaragua’s population is 5.1 million; 53 percent of the population is younger than 18, according to UNICEF. Poverty affects 2.3 million people, 831,000 of whom live in extreme poverty.

Granada, one of the oldest cities on the North American continent, sits on the shore of Lake Nicaragua, one of the largest lakes in Central America.

Tony Martyn described the weather as similar to Fayetteville in August.

Air conditioning is the exception.

‘‘We stayed sweaty all the time,” Newsham said.

One of the few refuges for street children is Cristo Sana-Los Ninos, a center established by the New Orleans Archdiocese. There is also an orphanage for girls ages 2 to 18 called Hogar Alegria.

The programs are a spinoff of the archdiocese’s Nicaraguan medical mission launched in the early 1990s by Bishop Gregory Aymond and Marianite Sister Mary Bertilla McNeely, a nurse who worked in famine-ravaged Somalia as well as at health clinics in poor New Orleans neighborhoods.

Newsham spent a lot of time working at the Los Ninos orphanage, where she quickly became attached to the boys.

‘‘After long, hot exhausting days, I would lay in my bed, too tired to sleep, wanting daylight to come so I could get up and do it again,” she said.

Children followed Newsham down the street asking for food, but said they would settle for a hug.

Newsham, who is 36 and single, said she had anticipated wanting to bring a child back to the United States.

‘‘I feel like there is so much more for me to give,” she said.

But ‘‘after seeing just how many children were in need, that thought quickly fled my mind. There are thousands of children in need, too many to bring with me.”

Newsham has been getting another shipment of donated supplies together to send down with another team in October. She plans to return next year and someday she would like to live there permanently.

‘‘I’ve had always had the desire to do something like this and I’m looking forward to getting back,” Newsham said. ‘‘My experience is not over yet.”